Infiltration is a new game by Fantasy Flight Games, and is based in the Android Universe, which is quickly becoming a major brand for them!  With this game, the upcoming re-release, or re-design, whichever you prefer, of Netrunner, along with a few novels,  Fantasy Flight is injecting new bio-fuel into a well-known and enjoyed universe since the Shadowrun days!

Infiltration is designed by Donald X. Vaccarino and is meant for 2-6 players, although in the video I’ll explain a variant for solo play.  It takes about 30 to 45 minutes to play, and is very fast paced, tense, and exciting throughout.

In Infiltration, you will play one of six futuristic cyber Operatives, or thieves.  They are storming the headquarters of CyberSolutions, Inc, in the hopes of downloading, or stealing, as many Data Files as possible!   The primary challenge is that on every turn, there are opportunities for the Private Security Mercs to close in on CyberSolutions, and once they arrive, everyone left inside the building is captured and loses the game… so, you better not just have a plan to download data, but to get out of dodge before the cyber-cavalry arrives to take you away!

Here is our video review, but read on for more details!

Escaping, or at least having a plan to escape, is huge, as again, if you are in the building when the Mercs arrive, you lose and any Data Files you have collected do not count, essentially putting your score a zero!  The winner is the Operative who downloads the most Zetabytes of Data Files AND escapes the facility!

The set up is very easy.  There are three types of “Room” cards, Blue for first level, Yellow for second, and Red for “secret”.  You shuffle each separately and you place six of the first level cards out in a row, steadily increasing, in a “stair” or “step” fashion as shown below.  Then you place six of the second level cards going from right to left, in the same fashion.  These represent the two level s and adjacent rooms, inside CyberSolutions.  Finally, one “Secret” room is placed in the middle.  This room is neither adjacent or on any level, it is simply “hidden” and during part of your exploration of the facility, you may find it… and sometimes, you may not!

Once the “game board” is set up, the first card on the left of the first level rooms is flipped up, all Operatives place their markers in the room, and any “Reveal” or “Enter” functions are resolved, as you are both “Revealing” and “Entering” the room.  As a note, there are several “functions” rooms can have, for example, “Reveal”, “Enter”, “Interface”, etc.  Each is a trigger, that will happen when that action is performed.  So as you explore deeper into the facility, and you reveal more rooms, their “Reveal” functions happen… but beware, they are not always good, as of course, CyberSolutions has both security onsite, and alarms and traps to protect their data!

Each player starts the game with their Operative Card in it's Healthy side, and four basic function, or action cards, in their hand.  Their names, and abilities you get when playing them are:

In addition, each player gets four item cards that are randomized.  The only complaint I have about these cards used in your hand is their size.  Fantasy Flight chose to use the smaller size cards they make, which is understandable as some of the items are played in rooms and stay in rooms, but the artwork on them is do good, colorful, and enticing, that you can’t help but wish they were larger.  Not a bad thing, but just something I found myself thinking about during gameplay.

Once you are ready, players take turn choosing an action or item from their hand to use.  The four basic actions always come back to your hand, so it’s not like you have to find another Download card if you use your main one.  Items will either come back or be discarded from your hand, with each telling you what to do with them when played.

There is a lot of synergy with items and a few good combinations you can pull off, but even the best laid plans have challenges to them.  Most come in the form of NPCs that will enter the facility when you Reveal a room.  For example, there is the head of security who fires at you when you are in his room, damaging you, and slowing you down.  Then there is my personal favorite, the CSX-13 android which enters play face down, but can be reprogrammed by interfacing with his room, and sending him on a stroll from the room he starts in, back to the beginning of the facility, destroying all tech locks and NPCs on his way… essentially turning him on his makers!

There are Tech Locks and late night Lab Workers protecting additional Data Files in each room, and of course, since you are an Operative of skill and subterfuge, sometimes the job calls for destroying these locks or taking out the lab workers!  Hey, not everywhere pays for working late!

Overall, the best part of the game has to be the engine that consistently increases the Merc’s proximity to the CyberSolutions labs.  Literally, very turn, they can get closer and closer.  Essentially you are rolling a 6-sided die each turn to add to the proximity dial, but as you delve into the facility, each alarm you trigger adds to the rolled result, as well as in game effects will add to it as well.  The most we had in one turn was +10 to the proximity dial, but when you are at 55 and you suddenly jump to 65, things get tense!

In fact, this gets so tense at times, you begin to have to make tough choices of, “Do I push forward and try and find a room with an escape ability in it’s interface” or “Do I begin retreating and trying to run out of the facility?”  For that matter… can you make it out?  As a great example, in our first game, one of our players was 3 rooms away from the top of the facility when the proximity dial jumped to 73.  They immediately began retreating, but they were wounded on the way out.  When wounded, you become delayed if you play your Advance or Retreat cards, essentially not allowing you to play either on your next turn, so you can only move every other turn until you are not wounded.  This caused the player to never get out of the facility and lose.  However, had they pushed their luck one more Advance, and moved from that top most room they were in, they very next room allowed you to ditch some data files and automatically escape, this, they could have had a chance to win!

These moments are the most fun.  When faced with decisions, impacted by the unknown, and trying to work together to outwit the NPCs and Lab Workers, but be just cutthroat enough to get your own hide out the door!

We’ve played multiple games of Infiltration, and since there are 32 room cards and only 13 are used per game, each game has a unique feel to it and it’s never the same choices twice!  I must say, pretty amazing randomness considering the small amount of room cards provided.  This speaks to the well-designed nature of the game.  Vaccarino’s design shines the more you play.

In the end, for the MSRP of $34.95, Android is a steal of a game.  The room cards are bright, bold, beautiful, and deadly!  The setup is easy, and the learning curve is fairly simple.  The choices you will have to make are plentiful, and the game can seem like a cooperative game and a competitive game all in one!  We highly recommend this game no just for the love of the Android Universe and the Cyberpunk-iness of the game, but for it’s overall well-balanced nature and just outright high-pressure fun! 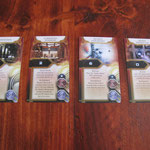 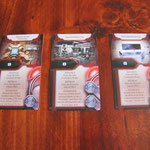 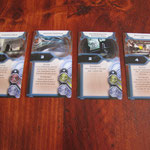 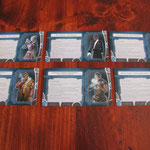 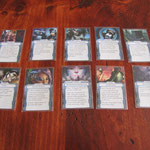 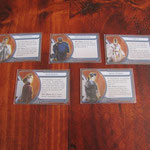 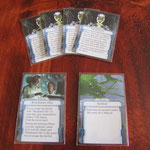 Your donations help us make more content, thank you for your support!